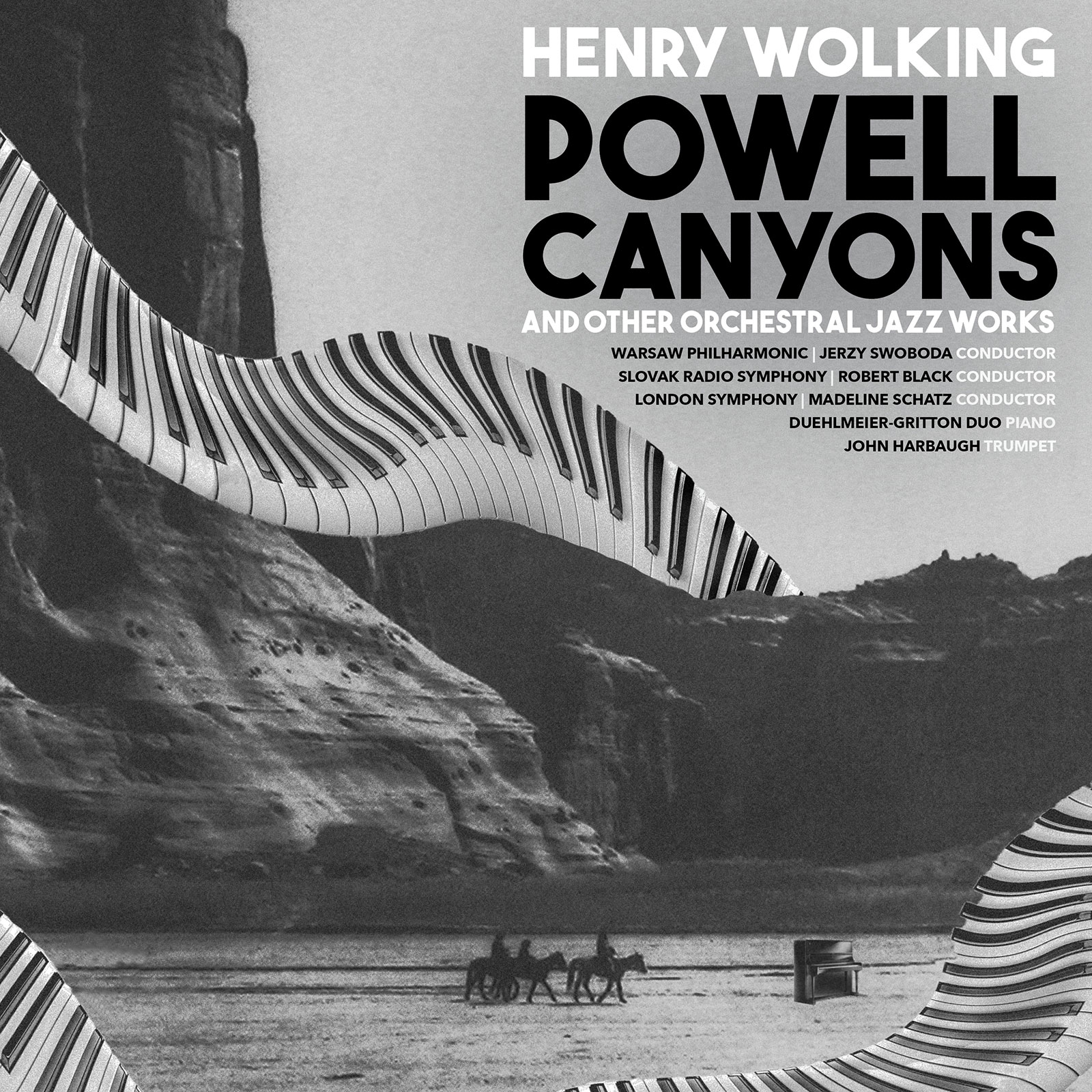 And Other Orchestral Jazz Works

Renowned Nevada-based Floridian composer, author, and teacher, Henry Wolking follows up his recent and miraculous IN SEA, with a Big Round Records re-release of POWELL CANYONS: AND OTHER ORCHESTRAL JAZZ WORKS. First released in 2000 by MMC Recordings, this stunning and effervescent album of orchestral jazz compositions is a quintessential key to understanding Wolking’s work and nature inspired aesthetic.

Featuring the London Symphony Orchestra, Warsaw National Philharmonic, the Slovak Radio Symphony, as well as collaborations with trumpeter, John Harbaugh, and Steinway artists, Susan Duehlmeier and Bonnie Gritton, Powell Canyons peaks in height and leaps into the depths for a seismic listening experience.

This earthly intensity is particularly felt in the Slovak Radio Symphony’s rendering of “Forests,” a piece that flourishes like a pine in winter and a maple in summer light. Conductor Robert Black leads these phosphorescent movements along with immaculate precision and feeling.

POWELL CANYONS: AND OTHER ORCHESTRAL JAZZ WORKS is, as Wolking intends, a valley spanning album—celebratory and leaping. Dig up and become a part of this landscape. 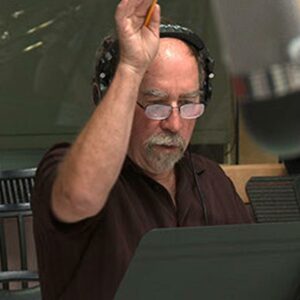 A trombonist and prolific, highly diverse composer who recently retired from The University of Utah's School of Music after nearly 40 years as Director Of Jazz Studies, Henry Wolking has found creative inspiration in writing for almost every imaginable type of large and small ensemble in classical and jazz music. His prodigious orchestral output includes symphonies, fantasies, and an overture as well as eight concertos featuring various soloists such as jazz quartet, trombone, flute, heckelphone, bassoon, contrabassoon, two pianos and horn.

John Harbaugh, professor of music at the University of Alaska at Fairbanks, holds the Masters degree from the University of North Texas. He has done postgraduate work at Indiana University, and he was formerly a member of the music faculty at the University of Idaho. He was a featured soloist on the nationally ac­claimed Hemet High School Jazz Band’s fourth CD release, which is distributed internationally. A clinician for United Musical Instruments, he has also spent four years as executive producer of the William Adam Trumpet Video Series. He directs the Jazz Program at the Uni­versity of Alaska, Fairbanks.

Acclaimed for the color, nuance and drama of their performances, Bonnie Gritton and Susan Duehlmeier have been heard in concert across the United States, Europe, and Israel. Their orchestral per­formances have included numerous collaborations with the Utah Sym­phony, as well as with the Warsaw Phil­harmonic Orchestra, the Boston Pops, the Westminster Chamber Orchestra, the Utah Philharmonia, and the Czech Radio Orchestra. They are listed Steinway art­ists and have completed an all-Gershwin CD for the Centaur label.

Studying at opposite ends of the country-Duehlmeier with Leonard Shure at Boston University and Gritton with Aube Tzerko at the University of California at Los Angeles- the two met as faculty members at the University of Utah, where they discovered that they had similar and complementary musical ideas, perhaps due to their training in the Schnabel tradition. Their first perfor­mances together as a duo in 1982 elicited such praise from critics that they have continued their collaboration, developing a versatile repertoire ranging from Bach to Gershwin.

Powell Canyons was commissioned by the Fairbanks Symphony Association in 1995; conductor Madeline Schatz re­quested that its setting be for jazz trio and orchestra. According to the composer, each of the movements was inspired by tributary canyons in the north end of Lake Powell in Southern Utah. The can­yons, which once drained into the Colorado River, are still beautifully preserved. “Dirty Devil is a long, deep and sinewy canyon with massive sheer red rock walls. Its character is that of constant change and surprises, and it runs for over forty miles on the southeast side of the lake. Dark Canyon is filled with levels of fossil­ized rock and deep pools. The lyrical nature of the melody comes from this wonderful canyon. Both the melody and the canyon contain abrupt surprises. White Canyon is easily approached by car or boat, and is full of fossilized wood and relics from its Anasazi inhabitants of over 700 years ago. Its music is the most straight-forward melodically, like the can­yon itself. In the style of a samba, it allows the soloists in the jazz trio to ‘work out.”‘

Henry Wolking writes of his single­ movement orchestral fantasy called For­ests: “When one truly experiences a for­est, one is struck by an astounding variety of coexisting phenomena-the sparkle of light on water, the wind on reflecting surfaces, ever-modulating shades of green, blue, silver and brown, and the actual sound of bird calls. Their tiny melodies are surprisingly jazzy, and are heard on solo instruments in the second half of the piece. When the wind blows, every exposed surface vibrates and be­comes a wind symphony. The piece be­gins as if one were viewing a majestic glistening forest from the air. What fol­lows is a journey into the forest, and increasing awareness of its mysteries. The last section represents the horror of de­forestation. This composition intends to be celebratory, reminding us of what we have.”

A sweep of orchestral sound center­ing around the descending minor second characterizes the opening of Forests. Wolking uses oscillations of arching the­matic material over slow-moving har­monic changes to represent the complex layers of the forest activities. The twelve­ minute work moves forward in waves of intensity, finally drifting into a more con­templative, fragmentary section. The cen­tral episode of lush, romantic harmony is shadowed by peripheral dissonances, and quickly dissolves back into the shifting ostinatos of the opening. Some influence of post-minimalist techniques, together with advanced jazz harmony and a postmodern layering, make Wolking’s original compositional language both fascinating and accessible.

Letting Midnight Out On Bail

In 1997, Henry Wolking completed a commission for the University of Utah’s Duehlmeier-Gritton Piano Duo for an extended two-piano concerto. Letting Midnight Out On Bail: Jazz Paradigms for Two Pianos and Symphony Orchestra was premiered in September of 1997 on the Warsaw Autumn Festival by the War­saw Philharmonic Orchestra and soloists Susan Duehlmeier and Bonnie Gritton. Henry Wolking has written extensively about Letting Midnight Out On Bail:

Celebrating a century of jazz piano styles, this work’s title is taken from a phrase in a poem by Langston Hughes, entitled “Jam Session.” Every movement is divided into two sections, each pre­senting and developing material gener­ated from the style of a significant jazz pianist. The entire work celebrates nine jazz pianists, spanning the whole cen­tury, though not in chronological order.

The first section of the first move­ment is dedicated to Thelonius Monk (1917-1982), and recalls faint strains of one of his most famous tunes, “Blue Monk.” Monk achieved deserved recognition in the late 1950s and was acclaimed for his highly personal approach to per­forming and composing. His bebop lan­guage employed elaborate harmonic schemes, quirky rhythms and irregular phrase structure. The second part of the first movement is inspired by the style of McCoy Tyner (b . 1938). Like Monk in the 50s, Tyner achieved national recogni­tion after playing with John Coltrane in the mid 1960s. It is safe to say that both sections of the first movement are also stamped with Coltrane. McCoy Tyner is one of the jazz titans still active in the performance and development of jazz.

Movement two begins with an un­derstated interlude that is reminiscent of the music of Bill Evans (1929-1980). Evans, the only pianist saluted twice in this concerto, affected me in the early stages of my musical development. Evan’s music is often compared to poetry-concise and elegant, with evocative imagery. “Salsamba,” the second half of move­ment two, offers a huge contrast in style by combining salsa and samba rhythms in the spirit and energetic Latin sound of New York pianist Eddie Palmiere. This multi Grammy award-winning pianist and composer has been performing with his own band since 1961. He is noted for his innovative approach to improvisation and his integration of Latin, jazz and fusion styles.

The two sections of the third move­ment are “Caprice” for Dave Brubeck (b.1920-2012), and “Ballade” for Gil Evans (1912-1988). “Take Five” is probably Brubeck’s best-known tune. Like “Take Five,” “Caprice” is in 5/4 meter, but only the accompanying pattern in the second piano alludes to the well-known melody of Brubeck’s work. “Ballade” pays respect to one of the finest jazz piano/ar­rangers of all times. The rich harmonies and unusual orchestral combinations are all characteristic of Gil Evan’s transpar­ent, beautifully eerie reorganizations of familiar works. His work as arranger with Miles Davis in the late 1950s on the Sketches of Spain, Porgy and Bess, and Miles Ahead albums are considered masterpieces. I always admired his sparse but thoughtful piano work, as well as his col­orful synthesizer approach in the 1970s with his own eclectic and innovative bands. The piano solos in this section are a bit more energetic than Gil Evan’s own, but my purpose was to create an atmo­sphere that would be reminiscent of his overall aural landscape.

The jazz waltz that begins move­ment four is written in the vein of Bill Evan’s classic tune, “Waltz for Debby.” It is highly melodic and energetic, and takes the place of the traditional scherzo found in most concerti. The ensuing section is labeled, simply, “Blues.” The melody of this section was inspired by “Goodbye Pork Pie Hat,” by jazz bassist and com­poser Charlie Mingus. The piano solos, however, pay homage to the work of the brilliant Canadian virtuoso, Oscar Peterson (b.1925). Peterson can play lightly and swing hard. He can also make the piano sound like a full orchestra through his amazing technique: big­ handed chords, tremolos, and rapid-fire lines that cover the full range of the in­strument. He creates an ocean of sound and color. The blues section builds to just such a climax with both soloists playing rapidly through the entire range of the piano.

Movement five concludes the con­certo by looking back to the earlier roots of jazz-ragtime and stride. Fats Waller (1904 -1943) was instrumental in devel­oping the stride style of piano playing, which uses the left hand to accompany the right hand by serving up the harmony in wide, leaping, broken chords. The right hand simultaneously plays complicated, syncopated melodies. Stride, like rag­ time, was essentially a vehicle for solo piano. It is presented in this section first with two solo pianos; then they are ac­companied by orchestra, as they take off into a phantasmagoria of the original material. Section two introduces a tango feeling, in combination with the stride and new ragtime material. I wrote this section using really large right -hand chords with Errol Garner in mind. The movement ends in a blaze of notes-a short fiery cadenza followed by a brief coda.

For further information about purchase or rental please visit this web site wolkingmusicpublications.com