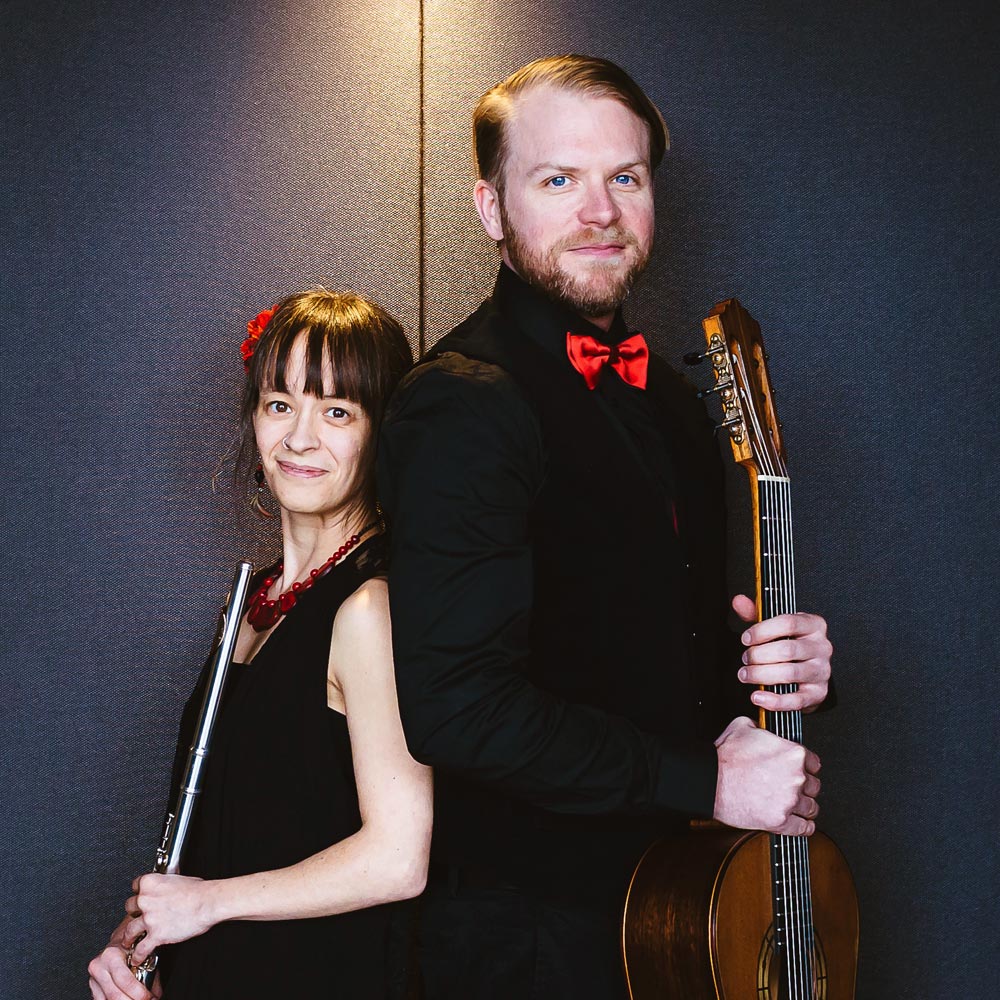 With their unique brand of ethno-classical music, Duo Beija-Flor presents a varied repertoire of works inspired by traditional and folkloric music from around the world. Guitarist Charles Hobson and flutist Marie-Noëlle Choquette began to perform together while in the midst of their graduate studies at Concordia University in Montreal. In 2010 they officially formed the Duo Beija-Flor. Since then they have performed concerts throughout Canada, the United States and Argentina. Their first two albums, Muzica, songs and complaints from Oriental Europe (2013) and Envol, a mosaic of music and cultures (2011), were released to much critical acclaim. Their unique combination of world and contemporary classical music has led the duo to be invited on several TV and radio programs (Radio-Canada, CIBL, Global TV, TVCK, Cogeco TV, etc.). In 2010, the duo was named laureates in the competition “Mon Accès à la Scène” and in 2012, they were recipients of the grant “Fonds de promotion de la GMMQ” from Québec’s chapter of the AFM.

Hailed by San Francisco’s Flute Talk magazine as “…an incredibly dynamic and creative team”, the duo has arranged several pieces so as to create a more personal style. They travelled to Buenos Aires in 2015 where they worked with guitarist Victor Villadangos and flutist Paulina Fain in order to perfect their arrangements of Piazzolla’s “Oblivion” and “Escualo”. To further the uniqueness of their programs, they commissioned Canadian composer Roddy Ellias to create a new work based on Cuban jazz. The piece, “Havana Street Parade” premiered at Concordia University in October 2013. With the addition of their tireless research to find works from lesser known composers that follow the duo’s style, Duo Beija-Flor has created a classical flute and guitar duo that breaks the mold.

Mr. Hobson began his classical studies at the Jacobs School of Music at Indiana University. While there, he studied with Argentinian guitarist Ernesto Bitetti and Italian guitarist/ composer Nuccio D’Angelo. After obtaining a BMUS in 2006, Mr. Hobson was invited to continue his studies in Montreal with guitarist Daniel Bolshoy. In 2008 Charles completed his graduate studies at Concordia University in Montréal. He has since been invited as a judge and to give master classes in Canada (Collège Lionel-Grioulx, Kiwanis Music Festival Vancouver, Vancouver Classic Guitar Society). An active teacher, he maintains a studio of private students and also works with Montreal’s francophone version of the El Sistema program. This program is designed to help underprivileged kids enter into the world of music. Charles is the director of their guitar ensemble.

Marie-Noëlle Choquette, flutist, is known for her “expressive and dynamic playing”(Flute Talk, San Francisco). She has performed as a soloist and chamber musician in several concert series, festivals and venues in Canada, the US, Argentina and Austria and is a recipient of grants from both the Canadian and Québec arts councils. A creative artist, she has produced and performed in various multidisciplinary shows that combine contemporary and improvised music with dance, video, marionettes and theatre. Recently she took part in the creation and performance of two new musical theatre shows for kids with the Moulin è Musique, Maelstr’m and Tableaux-Musique. With her duo, Duo Beija-Flor (flute and guitar, ethno-classical), she has performed in more than 100 concerts and released three albums (Envol 2011- Muzica 2013- Costas 2018).

In 2004 Marie-Noëlle graduated from the University of Montreal and earned a graduate performance diploma from Concordia University in 2007. Ms. Choquette was a participant in the contemporary music festival Impuls at Graz University, Austria (2009) and in several master classes (Denis Bluteau (MSO), Guy Vanasse (Orchestre Métropolitain), Claire Guimond (Arion), Sophie Larivière (Ensemble Caprice), etc…). An accomplished pedagogue, she is often called upon as a guest flute specialist for several Montreal area schools and has taught music history and chamber music at the École Secondaire Curé-Mercure in Mont-Tremblant, Québec. 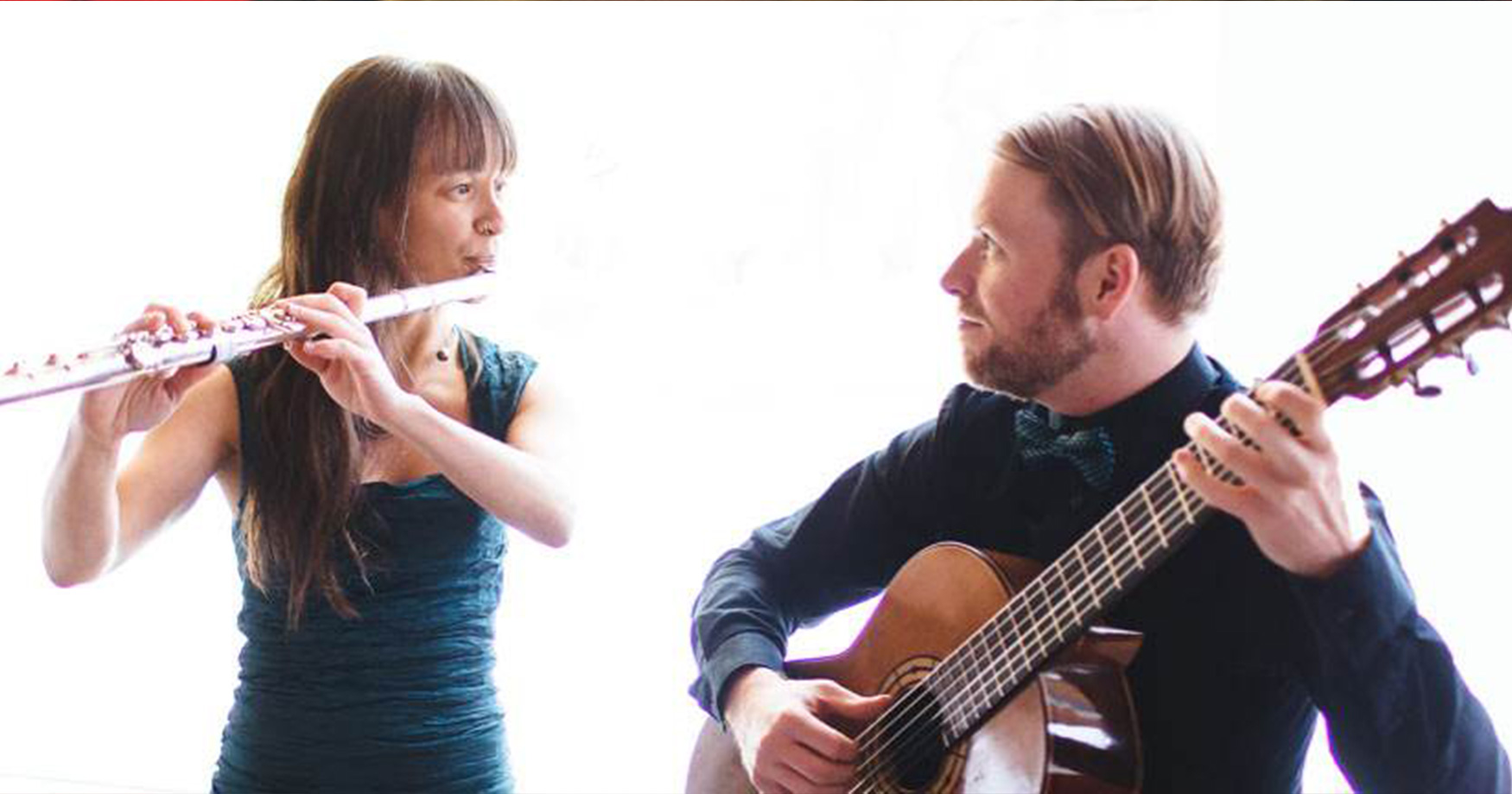 THE INSIDE STORY: Duo Beija-Flor and COSTAS